RSS feed for this section
By David Cameron on June 5, 2012 in Teaching and Workshops

Training for Actors and Directors 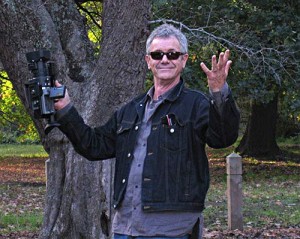 “You could go through a catalogue of acting scholars who try and describe acting in their books, but Davids advice, to me, was simply the cream of the crop! It has changed my life forever. Really.”  OSAMAH SAMI

“Connecting to your own life experience is essential for the Screen Actor; it’s what makes you genuine and unique. The boldest choice you can make is to bring yourself to the role and to live spontaneously moment to moment within the given circumstances of the story. Then when I see you, I see the character. My Process has been distilled from working on both sides of the camera; as an Actor and Screen Director. In my Screen Performance Workshops I always use a camera. Being comfortable and Present and knowing who you are on screen, is paramount in such an intimate medium.”

This is an Extract on Screen Performance from my new book:
AUTHENTIC MAKE BELIEVE
‘When I see you I see the Character’

Human Psychology is what you need to use as an actor, you can’t work outside it. That’s what makes you genuine.  And if you work outside yourself, it becomes about the words (and it’s never about the words.)  The words however do give you clues. Remember the ‘reality iceberg’; the 90% of human behavior below the water. The 10% above; the script, the dialogue and stage directions etc. are clues to this vast creative underworld in which it is the responsibility of the the Director and Actors to play and make Real. It’s actually about you. Why you would do it, what you want, where you’ve been, what’s in your way. The story will do the rest. It will give you a name, as well as the specific circumstances. It’s you within the given circumstances of the story. To try and play someone else is the great misnomer of acting.   All great actors are authentic, they’re relaxed, they’re present and listening.  They’re not scared, not worried how they’ll look, trying to remember their lines.  Trying to be something they’re not. Trying to tell you something, show you something, indicate something. No, they’re just being there, in the moment. The ‘now of the now’ as Miesner calls it. Living moment to moment.   And the irony is, that if you don’t have all the specifics you have in life, you can also get tense, and tension is the worst and you hear yourself say the lines and you freeze up. If you only know the lines, there’s a risk you’ll go to the screen test and you’ll have nothing to stop you being self-conscious. Then perhaps afterwards, you’ll naturally relax in the car on the way home and you’ll do the scene perfectly!  But it’s only better, because you’re relaxed and free. Your back in your own specifics, and you’ve given yourself the right to be present, but It’s too late. So the thing is, if you have enough specifics, you don’t need to worry.  If you know everything about the character, who you’re talking to, where you are, what you want, where you’ve come from, where you’re going, etc., and you have your own experiences, to do with things that happen in the scene, specific memories, and images; that’s all you need. You don’t have to ‘play’ it.  You just BE it, and say it, and it’s a strange thing, we know exactly what you’re talking about, and your authentic behavior tells us clearly who you are.
This is like Stanislavsky’s ‘Kiss of LIFE’

BRING YOURSELF TO THE ROLE BY

Being totally present and relaxed with the camera and microphone
Finding specific character clues in the scene
Making very personal connections to your character and their relationships
Applying a range of key preparation techniques and processes
Using improvisation to stay fresh, authentic and connected
Accessing character details that are outside your own experience
Maintaining a professional, relaxed connection to ones self and others during screen testing and shooting

What is a script breakdown?
The Directors preparation
Using the language of the Actors behavior, beats, objectives, actions, etc
Uncovering meaning and subtext.

What makes great casting?
The casting brief.
Directing a casting.
The role of the Casting Director.

Working with the Editor
Choosing takes
Cutting for performance.
Directorial approaches to sound design and music.
Sound as a Storyteller.

FOR ACTORS  Directors to audit

David’s ON CAMERA SCREEN PERFORMANCE PROCESS . What if you could be so relaxed and present within the given circumstances of the story,  that when I saw you, I saw the character?

David’s ‘GETTING THE GUEST ROLE’ WORKSHOPS . What if I showed you how I cast and shot main guest roles, and you could experience what a great opportunity they are to practice your skills and expand your reputation.

David’s VOICE PROCESS THAT BRINGS LIFE TO ANIMATIONS  AND EVEN SELLS SOAP.  What if I showed you something special, that the Actors I’ve cast in animations, all have in common. You can make us laugh, and you can make us cry. The Voice reveals everything.

FOR DIRECTORS   Actors to audit

David’s PERFORMANCE ORIENTED DIRECTING FOR THE SCREEN.  What if your Directing process was built around helping create and capture great performances, and how this process effects all aspects of scripting, casting, and shooting.